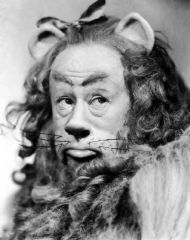 I’ve been reading a book called “Telling Secrets” by a gentleman by the name of Frederick Buechner.  He’s new to me but known as one of the greats.  He is an author, old time minister and theologian.  The book touched me in so many ways.  You see, he shares very intimate details of his life that are just so sad and yet, REAL.  We’ve all been there and have experienced that crushing pain of abandonment, fear, rejection and the anxiety we experience as we try to control the level of pain we “allow” in.

That first night I picked up that book I fought back tears.  It really struck a chord with me so much that I wanted to share with you. He actually described himself as the cowardly lion on the Wizard of Oz.

It was a stained glass panel hanging in front of a window in his study that he stared at day after day when he sat down to write.  The scene was of the Cowardly Lion standing there with his hands tied behind his back against a pole, weeping profusely while black flying monkeys flew overhead.  Mr. Buechner, in his old age realized that that panel represented his life in many ways.  Outwardly he appeared so courageous but inwardly he was as weak and powerless as one can imagine.

Where Can I currently purchase this book?
Journal of a Sinner, Listening for that Still Small Voice

2 thoughts on “The Cowardly Lion”